“But one storm they can’t hide from down here…is me.”

In the comic book and gaming world the Lost Valley and the Varanid Empire is reasonably well known. The Lost Valley is a pocket of space that exists at all points in time simultaneously. In this world, a race of saurian humanoids rules mercilessly and mammals, especially humans, are hunted for food or used as tortured slaves.

The art is well drawn with good detail for the penciling. For me, the colors are a bit simplistic. Overall, however, it works for the story line.

We already know Turok and his gang by this point. Turok is the hero of the story, a father in search of his daughter and resistant to the call of the hero for the majority of the story because of that focus. We are also introduced to Vigilant Cross, the leader of a mutant gang. Vigilant Cross comes across as a capable leader doing whatever she must to survive and push back against the Varanid Empire. She is a rugged character, but likable despite the initial mistreatment of Turok and company by her people. Lastly, we are shown the true vileness of the Imperator Vex. In his quest to spawn an heir after twelve failures, he is willing to consume human children to add to his virility. In this issue he comes across as pompous, vile, and a bit ridiculous, but I believe this is to hide a truly powerful foe. Once the conflict truly starts, Turok will have a nearly impossible time with this one.

The story mixes rebellion against totalitarian rule, a kind of post cataclysmic feel with mutants, and the inexorable mission of a father to protect his daughter. In the tortured existence of the slaves we see how merciless and evil the Varanid’s are. It leads to a believable goal of the Imperator eating the children and making himself a real threat.

Turok must work with the mutant underground to get into the Imperator’s castle. Doing so requires him to also work with a sect of Varanid cultists who have been nearly wiped out by the Imperator, the cult of Shashiya of the Seventy Seven. The mutants will get Turok to the capital of Ak-tha fast enough to save his daughter on the condition that he kills Vex. 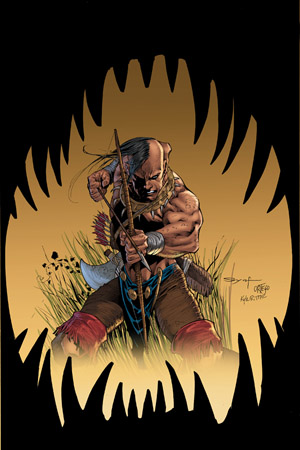 The tortured slaves are pretty scary to look at. Eating children is definitely not for young readers. However, there is nothing directly gory or visually disturbing. Most of the hard core parts of the story are implied. I’d equate it to a PG-13 rating for content.

I would recommend Turok by Dynamite comics to anyone who is familiar with the games or the older versions of the story by other publishers. It would also be enjoyed by anyone into post-cataclysmic story lines, or alternate-Earth stories.