This is only my second foray into the world of Pathfinder. My first was the mobile card collection game where I originally met the main characters of the comic. I have to say, this was a lot more grown up than I expected. 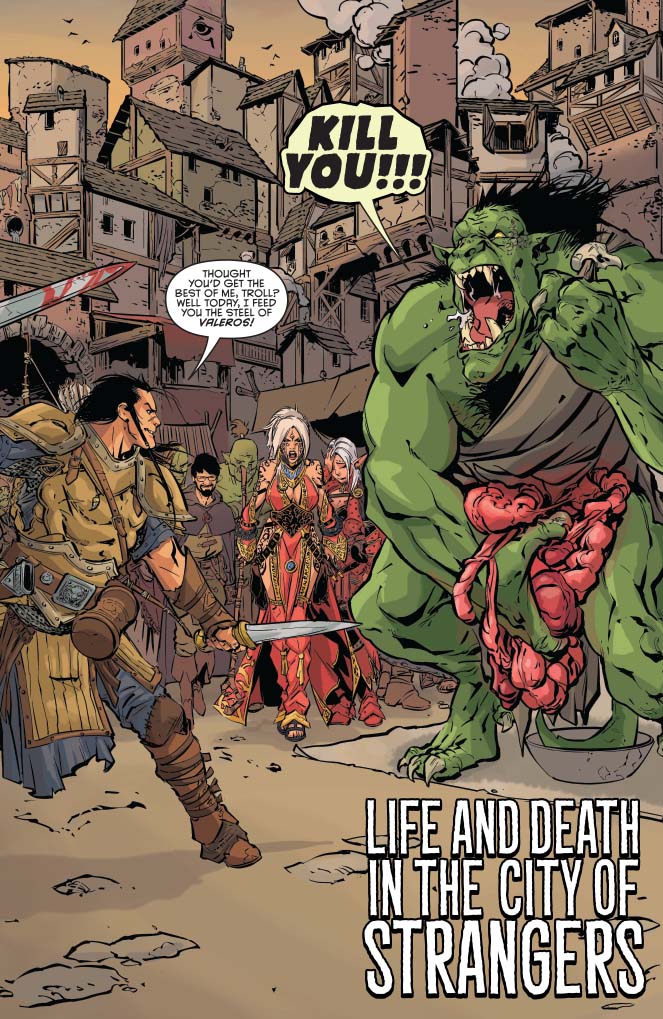 Spiral of Bones is set in the Pathfinder world of Golarion in the City of Strangers. We see the standard racial tropes of humans, elves, trolls, half-orcs and the like. Ancient ruins, tales of giants, the magic spells I grew up on playing DnD, but with their own unique flavors and names are scattered throughout. So this was a fresh spin on the types of stories I grew up on. It was a fun new world for me and one I want to explore more of.

As I have said in past reviews, I am somewhat picky about the styles of art I want to see in comics or animated media. My compliments to Tom Garcia and Morgan Hickman for their work. This was a rich set of panels without being cluttered. It kept well with what I had already experienced in the mobile game from Obsidian. The colors were vibrant and matched the tone of the story as well as the physical setting. I did not find the drawings to be too abstract or so cartooney as to be distracting.

While the worldbuilding made me curious, given that worldbuilding is where my own writing strength lies, it was the characters that drew me in to this story the most. Having met them only in passing through the Obsidian game, the comic story was more fluid and delved deeper into their personalities. From the brash young warrior, Valeros to the long-suffering Sorceress, Seoni and the elfin rogue, Merisiel, I was immediately reconnected with these new friends. Their interactions at the beginning with the surprise encounter had me chuckling and enjoying the story right away. Later on, I got to meet the serious dwarven ranger, Harsk, and Ezren, the wizard who is likely my favorite character out of the group. While they do not have as large a role as the others, their little adventure drives the story.

Spiral of Bones starts media rez in the City of Strangers on Golarion in the region of Varisia. The heroes have come here to do some research at a particular black-market bookdealer – Ezren’s doing. While seeking a place to stay for a bit, Valeros gets into a tussle with a troll soothsayer while Seoni and Merisiel watch in exasperation. The fight is broken up by a half-orc Inquisitor – a specialized priest of Pharasma, the goddess of death. Her name is Imrijka and she knows Valeros. After the misunderstanding is cleared up with the troll, the four of them find an inn and settle in for the night to wait for Ezren and Harsk.

Meanwhile, Ezren and Harsk have stumbled on some ruins deep below the city and find themselves locked in a vault of some sort after being attacked by strange monsters of a type I’ve never seen before. Ezren has lost his spellbook and so cannot memorize new spells to get them out of the predicament. Instead, he uses a spell to contact Seoni telepathically and let them know where he and Harsk are.

Seoni and the others, along with Imrijka, make their way down into the depths looking for their missing friends. There they end up battling the creatures. Valeros gets tossed through a wall where he finds a bauble he shouldn’t have touched and ends up in a new place that is implied to be the afterlife. Seoni is injured, but the monsters are defeated. Imrijka starts a healing spell and that is where we leave the scene.

The next panel has some kind of horned goddess holding up Valeros in a strange otherworld for a moment. Then the scene changes abruptly again to a brief Starfinder story introduction. [Starfinder is the Spelljammer/sci-fantasy world and d20 system that is companion to Pathfinder.]

All the grown up stuff is implied or in the conversation rather than shown. The story is fun sword and sorcery and a good read for those who, like me, enjoy such. I’d definitely recommend it to those looking for a comic version of this type of tale.