Aboard an abandoned ship called the “Chimera”, two high-school aged girls are exploring separately. Yelling into the darkness, each asks “Are you Ghouli?” One crashes through a deck into a room where the other is standing. They charge at each other, stabbing desperately. From separate points of view, we note that each one sees the other as a vile, multi-armed beast.

We hear Scully in a voice-over: “Most believe there are two states of consciousness, sleep and wakefulness. But there is a third: hypnagogia, characterized by dreamlike visions and strange sensory perceptions.” She is frozen in that state in a strange bed, then finally stirs and grabs her gun, stalking through a house. Jumping back to a conversation with Mulder, she says she was led to the Chimera (pointing to its picture on the desk).

At the ship they meet Detective Costa, who explains that the victims did not know each other, and that they are unconscious in the hospital, having survived their wounds. Scully sees a man standing on the ground while aboard the ship, who quickly disappears. The EMT reported that each girl asked if he had seen Ghouli.

Mulder and Scully interview the girls separately, hearing nearly identical stories. They had dreams which led them to the ship, and each saw a snow globe with a ferryboat inside, much like Scully experienced. They also each claimed that Jackson Van deKamp was their boyfriend.

Reaching the Van deKamp house, they hear two gunshots and force their way inside. Scully realizes this was the house from her dream. The back door is open and two bodies are in the kitchen. Another shot comes from upstairs. Racing up, Scully finds a young man’s body on the floor. Detective Costa seems satisfied with the explanation of a murder/suicide. Scully finds bottles of Clozapine and Diazepam, prescribed two months ago but never taken. She also finds a snow globe with a windmill inside, labeled “We’re not in Kansas anymore”, and she takes it. Mulder confronts two men outside the house who he believed had been following them since their arrival, but they are evasive.

At the hospital, Scully swabs her mouth, then takes a lock of the dead boy’s hair. She wants to test for DNA, believing that he is her son William. In a tearful monologue, she apologizes, saying she was trying to keep him safe. Mulder enters as she finishes, and hugs her. After they leave, the body bag unzips and the boy sits up on the table! 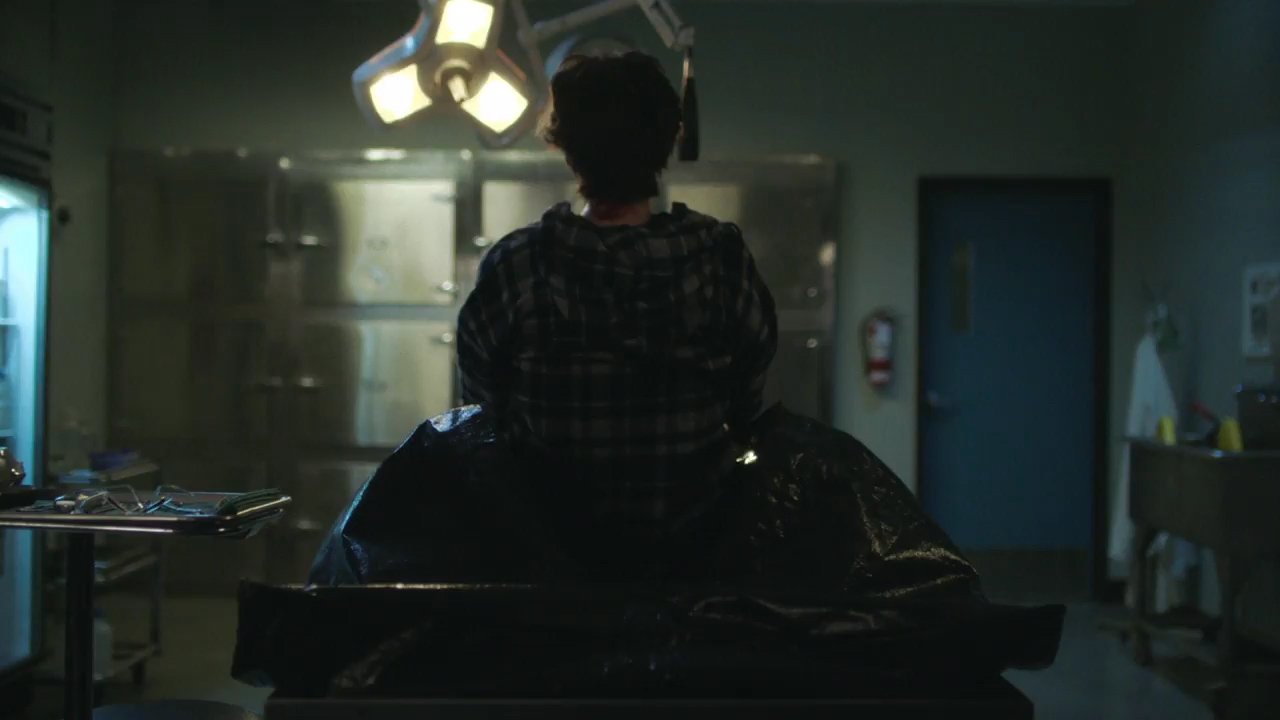 Sleeping on a couch in the hospital hallway, Scully has another ‘freeze’ like earlier and sees a dark figure. Following him, she sees the “Kansas” snow globe and has more visions of the bridge from the previous season. She awakens, to realize it was all a delusion, when the coroner is yelling to her, asking where she put the body. In the morgue, they find the empty bag and a window opened from the inside. Going outside the front, she is bumped by the man from near the boat, causing her to drop the snow globe. She asks who he is and he replies, “Don’t give up on the bigger picture.”
Returning to the house, they find no trace of anything useful on his laptop. By gut feeling they search for and find a second laptop with evidence of much online activity, including a backdoor into the Department of Defense. Cars approach the house and the pair who Mulder confronted earlier orders them to leave. Mulder ‘accidentally’ spills a drink on the second laptop before he goes.

Skinner calls and orders Mulder to return to D.C., while Mulder says that he needs to come there. Skinner reluctantly agrees and meets Mulder on the boat. He references “Project Crossroads”, started by Dr. Masao Matsumoto in the 1970’s, which was the last document Mulder saw before sabotaging the laptop. It involved eugenics and hybrid DNA, but was unpredictable and got defunded 15 years ago. Dr. Matsumoto burned the files in an attempt to protect the participants, but the DoD has been hunting for them. Mulder confides to Skinner what he had nearly told Scully earlier, that Jackson Van deKamp was their son William.

Scully interviews Jackson’s psychiatrist, who says that he reported detailed visions. Claiming that she cannot discuss them, she is surprised when Scully describes her own visions of pandemic that are identical to his.

In a flashback, we see Mulder’s supposition of the crime scene at the house. The two DoD men shot the parents, making it look like there was only one shooter. They hear Mulder and Scully forcing their way in and run out the back. Jackson had fled upstairs and ‘plays dead’ by firing a shot and projecting the appearance of a wound.

Jackson goes to see one of the girls in the hospital and apologizes, explaining that he made up Ghouli as a prank and projected the beastly image into each of their minds. Many cars arrive outside and he realizes that he has been found; the other girl saw him with the first and texted that he was there. 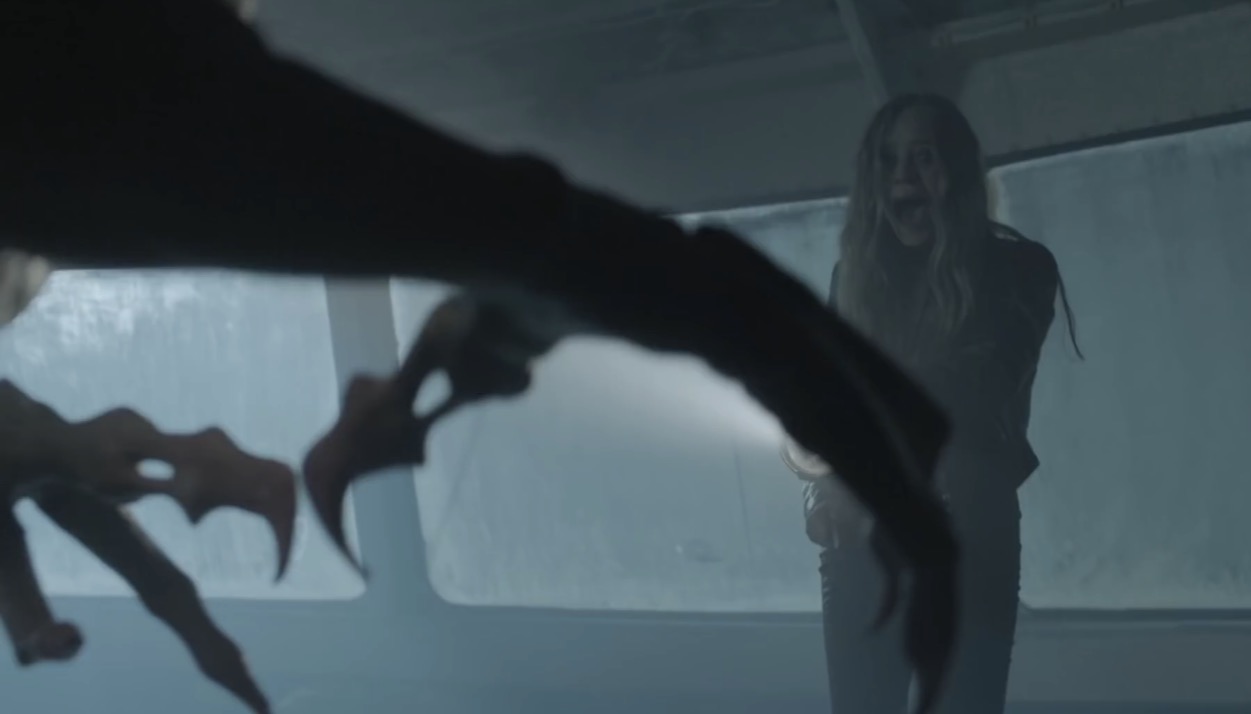 Jackson is confronted by the DoD men and runs, with them in pursuit. Creeping in hiding, he projects the Ghouli image at them, causing them to attack. One survives, and is joined by a third agent. Mulder and Scully hear the shots and try to find Jackson. He gets the remaining DoD agents to see each other as an agent and Scully, and they shoot each other. Mulder and Scully try to convince Jackson to come to them, but he makes himself look like a nurse and runs away.

Leaving town, Mulder and Scully stop at a gas station with a windmill like she saw in the snow globe. While filling the car, Scully sees the mystery man again. She asks if he is Dr. Matsumoto, but he denies it. Before walking away he tells her, “If you don’t stand for something, you’ll fall for anything.” When Mulder returns to the car, they go inside and check security camera footage. The man who had just talked to Scully was actually Jackson/William.

A FEW THOUGHTS:
– Opening credits end with the tag “YOU SEE WHAT I WANT YOU TO SEE”
– Mulder discovers the “Ghouli.net” website in research, but is dismissive, saying it is lacking. He is disappointed that modern monsters seem to have no backstory anymore.
– Mulder finds a book called “The Pick-Up Artist” in Jackson’s bedroom. I did not go for a close comparison, but at a glance the author looked like Scully’s mystery man.
– When Skinner calls Mulder, the CSM was lurking in the office, adding to the suspicion factor!
– I give this episode a B. Although it started in the “monster of the week” format, it did break tradition by tying into the conspiracy arc. It was nice to see William finally brought into the narrative; I had forgotten until I went back and checked that “Van deKamp” was the name revealed in the first episode this season. The projection ‘disguise’ was an interesting power that sometimes felt overused (the mystery man) but was a clever tactic in the hospital fight.

***
Nick Monitto has been a sci-fi geek for a few decades now, having watched the original “X-Files” in its day. He has never created a supernatural monster, though he did participate in a séance that unintentionally turned scary.