A nervous man in a diner raves about invading Martians. He thinks he sees one in a window, but it is in fact his reflection in a mirror. He turns to the cook in panic, who appears to be some sort of horned devil, cackling.

A giant furry man enters an office and answers a phone. It is Scully calling, and after removing a mask we see the man is Mulder in a Sasquatch costume. As he starts to wax poetic about the first time he found a Bigfoot print, Scully hangs up on him. A stranger accosts Mulder in the FBI garage, ranting about a giant conspiracy. He complains, “They got to you already” when Mulder fails to remember him. Someone approaches from the stairwell, but never gets to them, and the man disappears.

Mulder starts telling Scully about the encounter, including how the stranger knew that “The Lost Martian” was the first “Twilight Zone” episode Mulder ever saw. Though oddly, that episode does not seem to exist. Scully walks out of the office while Mulder is having a flashback, and she encounters the stranger in the garage. He hands her a box and asks her to check his fingerprints on it, saying “Help me find me” and “They’re trying to erase me”. He sees two men approaching, and runs away.

The box is an old dessert product, ‘Goop-O ABC’. Scully says she has memories of it as a kid, though whenever she mentions it, people insist she must be talking about ‘Jell-O 123’. Mulder explains that this is the Mandela Effect, a memory of things that are not shared by the majority or the factual record. They meet the stranger (named “Reggie”) and he tells them how he found childhood books with the wrong author’s name when moving his mother’s things, and brought them to an antique shop. The shop owner says he has heard similar stories from others. He claims that the government is helping corporations by making people forget about old dangerous products. When Reggie returned to the shop to investigate further, the owner had been killed. 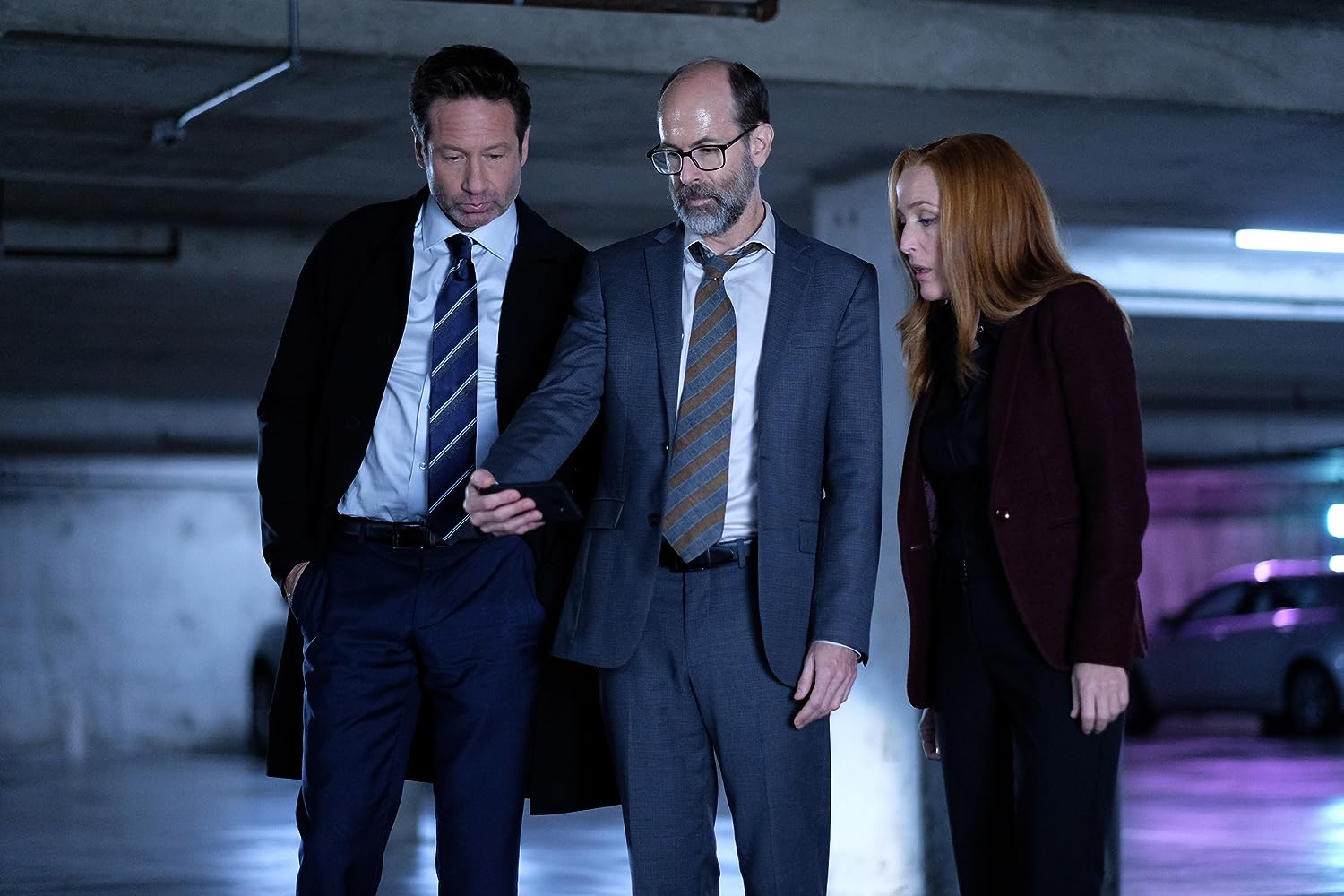 Reggie insists that “they” are behind it. When asked who, he shows a picture of a sinister-looking man named “Thaddeus Q. They”. A video clip claims that They is a neuroscientist who figured out how to manipulate collective memory, making strange claims about NASA experiments and the like. He worked at a hospital in Grenada, where Reggie was as well. Reggie produces a letter that he wrote to his ‘future self’, but it is entirely redacted. Nevertheless, he goes on to say that an alien came to warn Earth about its ozone layer, but was captured and experimented on by the US government. This caused Reggie to drop out of medical school, join the FBI, and start the X-Files!

More strange men appear in the garage and Reggie again runs away. Mulder creates a giant evidence relationship board in his office but cannot trace it all out. He receives a call from “Dr. They” and goes to meet him. Dr. They shames Mulder for only just now finding out about him, claiming that we are in a post-conspiracy/post-cover up age where no one discerns between truth and fakery. He feels safe claiming a power to control the past, because no one would believe it, before admitting that he really cannot. The seeds of uncertainty are all he needs. 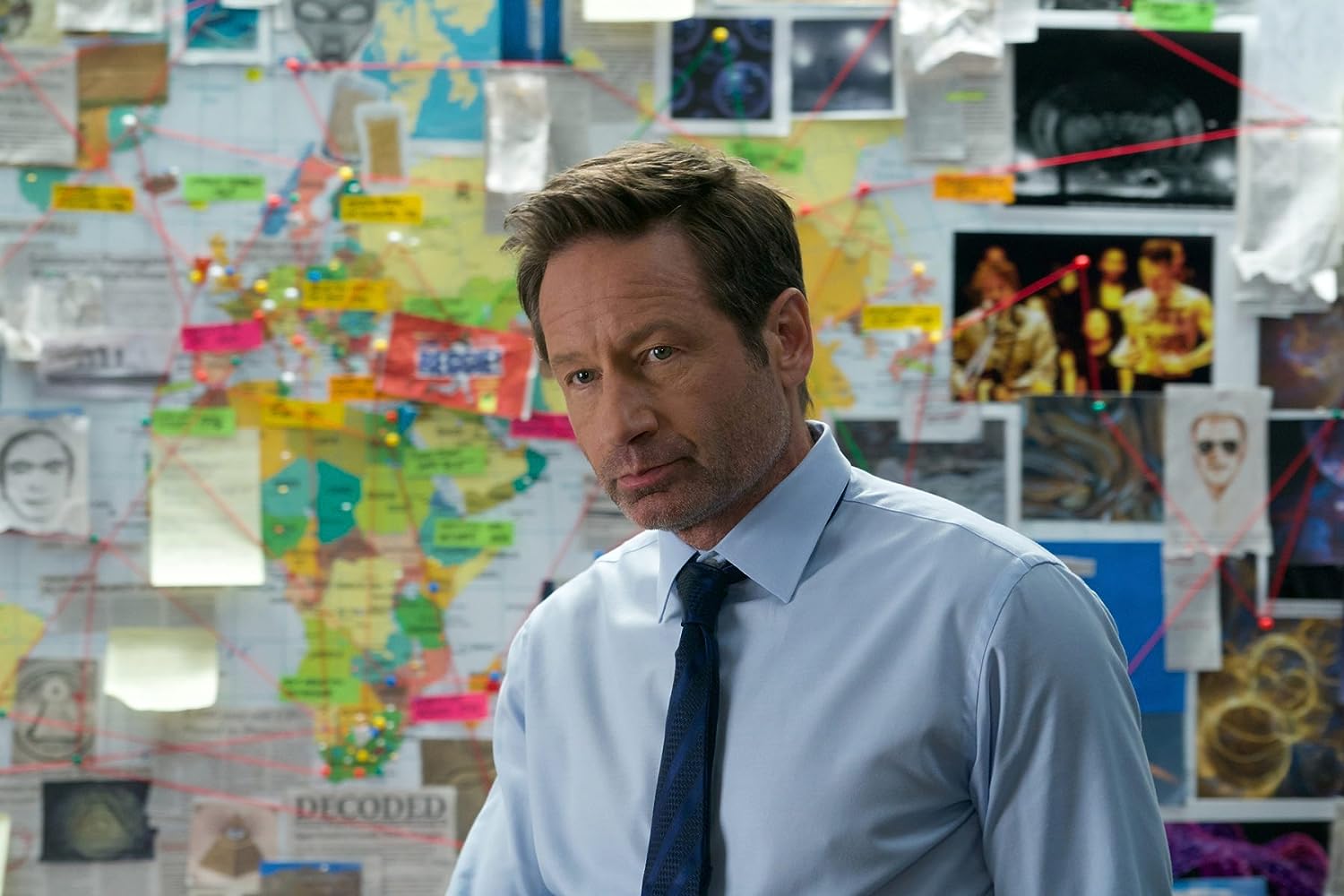 Reggie and Mulder are back in the garage when Scully surprises them and reveals what she has found. He is, in fact, Reginald Murgatroid. He didn’t appear in a high school yearbook he gave Scully earlier because he was only there for a few weeks. He dropped out and earned a GED, then joined the Army and participated in the 1983 US invasion of Grenada. He recovered from injuries at the hospital there, and then went on to spend years working at various bureaucratic agencies. The last of those was the NSA, where he had an illegal wiretap on Mulder & Scully. In the past year, he had a breakdown and was committed, using the wiretap information to create an elaborate fantasy.

A decades-old station wagon pulls up and two men get out. One is holding a giant net while the other puts a straitjacket on Reggie. Although they now know he was lying, Mulder asks Reggie what happened on their “last case together” (which he had alluded to earlier). Reggie tells an outrageous story about them finding the wrecked remains of the Voyager probe, then meeting an alien in a UFO who says they have studied humans for years and no longer want any contact. 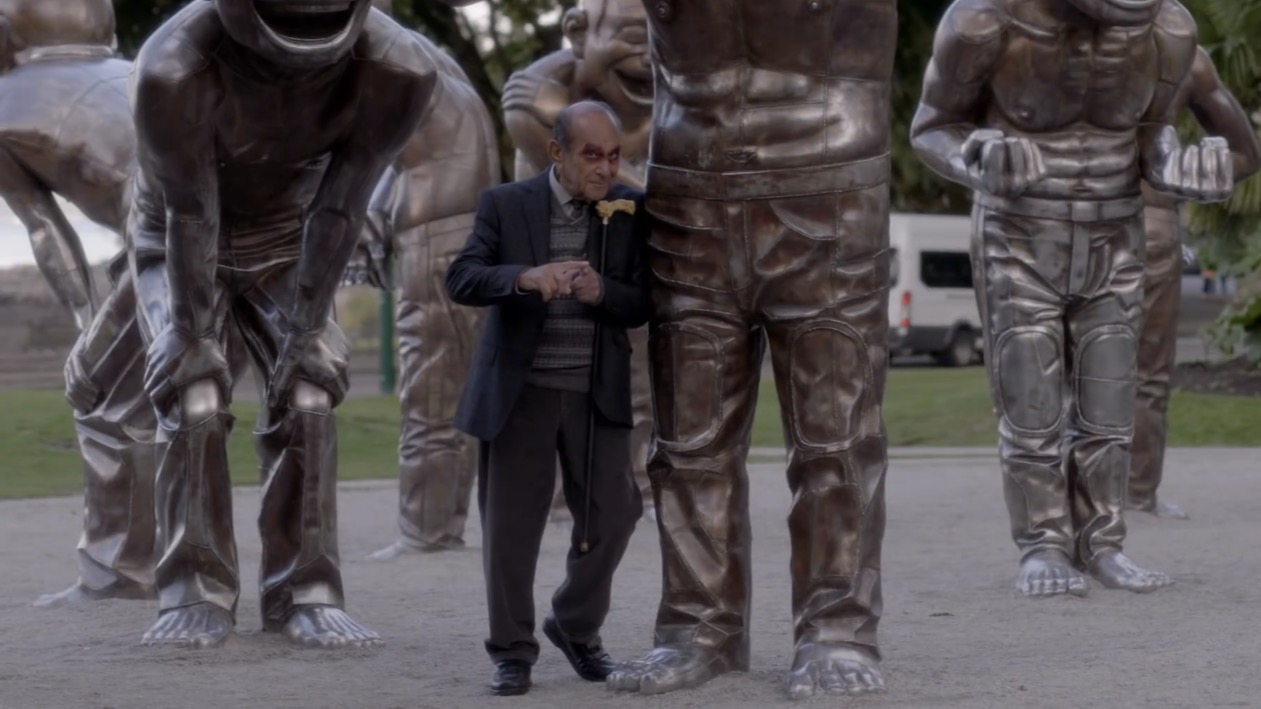 Mulder & Scully are at his home where he is watching the Martian episode; it was not a “Twilight Zone” after all, but from a knockoff series called “The Dusky Realm”. Before he can finish, the VCR jams and eats the tape. Scully brings in a giant Bigfoot print mold that she made from the old Goop-O kit. She almost tries it, then stops, deciding to just remember it as it was.

A FEW THOUGHTS:
– Opening credits end with the tag of the traditional “THE TRUTH IS OUT THERE”
– The cold open was black & white footage from what turned out to be the “Dusky Realm” episode.
– When Mulder has the flashback of his 8-year-old self watching “The Lost Martian”, it is done with his adult head on a child’s body.
– The Mandela Effect was coined by Fiona Broome to describe the widely-believed false memory that Nelson Mandela died in prison in the 1980’s.
– Reggie, Mulder, and Scully have a couple running disagreements through their meetings. Mulder keeps positing parallel universes as an explanation, which the others angrily deny. Reggie repeatedly insists that there is no Mandela Effect, but rather a Mengele Effect (the memory that Josef Mengele was captured in Ohio in 1970)
– The mistaken author name on Reggie’s children’s book and its contents (propaganda war cartoons) are allusions to Dr. Seuss and some of his WWII cartoons.
– When Reggie is explaining why corporations would want people to forget, his dialogue runs as, “Companies like G— spending billions to repress memories!” At the third word, there is a blatantly obvious and sloppy edit cut. This is reminiscent of the old episode “The War of the Coprophages”, which featured a brief image of a shockingly realistic roach crawling across the screen. That one was written by Darin Morgan, who wrote and directed this episode.
– Reggie says the antique shop owner was killed by a lawn dart. Scully asks what that is, then expresses disbelief in such a thing when he describes it.
– After Reggie claims to have founded the X-Files, we see an altered version of the opening credits. The music is similar, though it features an a capella voice backing. “Fox Mulder” and “Dana Scully” are listed instead of the actors’ names. Reggie is credited as “Reggie Something” because we do not yet know his real name. The tagline reads “THE TRUTH IS OUT THERE?”
– The altered reality continues with Reggie inserted into the first Mulder/Scully meeting scene, as well as a montage of other moments.
– The reveal of Reggie’s bureaucratic career includes a montage of him at identical cubicles for the USPS, IRS, SEC, FBI Witness Protection, the CIA, and the DOD. Notably, he is asleep at the desk while at the SEC.
– Reggie is taken back to “Spotnitz Sanitarium”, a reference to longtime X-Files writer & producer Frank Spotnitz.
– I give this episode a strong A. It was bizarre in a way that I absolutely ate up and enjoyed! The narrative structure was disjointed, but (in my opinion) with a very good purpose. I could see this being a ‘love it or hate it’ kind of episode.

***
Nick Monitto has been a sci-fi geek for a few decades now, having watched the original “X-Files” in its day. He may or may not have been tripped up by the Mandela Effect a few times himself.